When official Ireland refers to women who have made real contributions to Dublin life, the heroic Alice Leahy is rarely mentioned.

Alice Leahy has worked tirelessly with the homeless since the early 1970s. She has also contributed to many reports and official bodies dealing with everything from crime to mental illness. Let’s honour this great woman now. Perhaps by building something practical like public wash-rooms for the homeless that are safe and monitored? 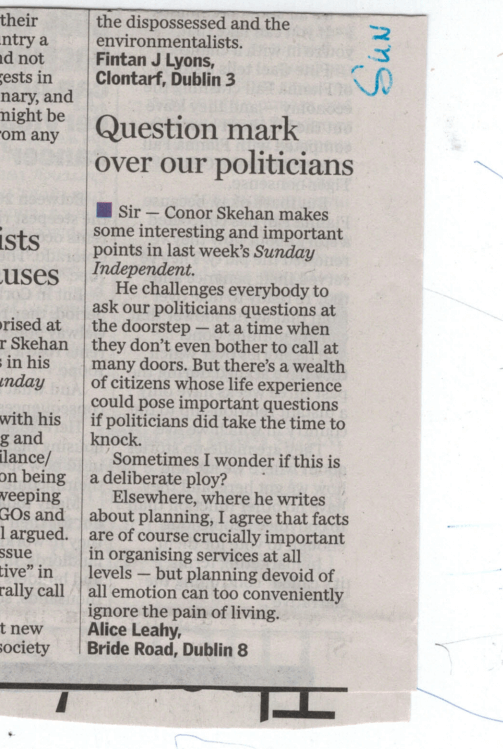 Sir – Mr Murphy said, “he was satisfied that the traditional type of housing in this country would not supply the housing needs for a long time and it was possible that the erection of pre-fabricated houses might be undertaken to a limited extent in order to cope with the most pressing requirements”.

It wasn’t the current Minister for Housing, also called Murphy – Eoghan – it was Mr TJ Murphy, Minister for Local Government, speaking in Dublin Airport on his return from London in 1948 and reported in the Sunday Independent, September 5 1948, and reproduced in your supplement celebrating 70 years of the Republic (Sunday Independent, April 14).

So what has changed since that time over 70 years ago? Have we learned anything in the intervening years? From what we read about housing in today’s papers – no. I suggest the only change is the price of the paper, then two pence!

Sir – I hadn’t yet read my Sunday Independent (December 31) when a man I know tapped me on the shoulder to tell me he had read a wonderful short story by Ciara Ferguson, called The Little Smashed Girl, while having his coffee in a St Stephen’s Green cafe. “Do read it”, he said.
It was a wonderful read and captured, so accurately, what we have begun to take for granted in our capital city and beyond. Ciara portrayed the many emotions, some hidden, when telling the story of this young, homeless woman in Dublin. It was fiction, maybe in this instance, but so real. While we are bombarded with statistics on a daily basis, I hope this didn’t deter people for reading this short tale. It should be read by those with responsibility for planning and delivery of services – because it’s what so many homeless people are experiencing today, but they are often unable to articulate their problem.